Climate change is here and it’s costing lives.  It’s our own fault, nobody else is to blame but the person writing this article and the one reading it. You need to know what is going to happen next.

In 2012 many of the warnings scientists have made about global warming went from dry studies in scientific journals to real-life video played before our eyes: Record melting of the ice in the Arctic Ocean. U.S. cities baking at 95 degrees or hotter. Widespread drought. Flooding. Storm surge inundating swaths of New York City.

All of that was predicted years ago by climate scientists and all of that happened in 2012.
–  SETH BORENSTEIN, AP Science writer

If 2012 did nothing else, it opened our eyes to the reality of climate change, the cold hard facts. It’s here and it’s devastating. We may have survived the “end of the world” predicted for the the 21st of December, but we cannot outrun this.

Here is a summary of some extreme weather events this year;

The key driving factor in these extreme weather events is the global rise in temperature.

It’s accepted by the majority of the scientific community that climate change and in particular the global temperature rise, affects our weather by leading to more extreme weather events. E.g. Widespread increases in heavy precipitation and severe drought.

Future climate change will very likely be associated with more very hot days and fewer very cold days. The frequency, length and intensity heat waves will very likely increase over most land areas. It is likely that the average maximum wind speed of tropical cyclones will increase, though there may also be fewer cyclones. A number of regions may experience more intense droughts, including southern Europe and the Mediterranean region, central Europe, central North America, Central America and Mexico, Northwest Brazil, and southern Africa. Increases in heavy rainfall might contribute to increases in local flooding in some catchments or regions. In coastal regions, sea level rise will very likely contribute to extremes in sea level. [Read more] 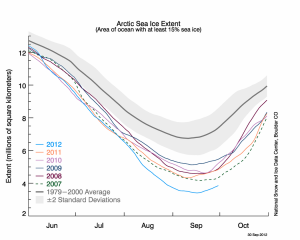 Due in part to transfers of heat from extensive open water areas to the atmosphere, air temperatures at the 925 hPa level averaged for September 2012 were from 2 to 5 degrees Celsius (4 to 9 degrees Fahrenheit) above average over much of the Arctic Ocean; much larger departures from average were the rule at levels closer to the surface. [read the full article]

So what we can take away from this is that the warmer water and in particular the warm air temperatures melted the ice faster. As the world continues to warm, the departure from the normal ranges will widen and the the inevitable will happen, all the ice will be gone in our life time.

The polar ice caps play a major part in keeping our climate moderate and cooling the planet. The ice acts like a great refrigerator, cooling the world’s atmosphere. It’s also a great big mirror reflecting solar heat back out of the atmosphere. Dark green seas, while beautiful, attract a lot of solar heat being much darker in colour than the gleaming white ice.

Loosing these major cooling devices for the planet will be like shutting the air conditioner off in your car on a hot day and closing all the windows. It’s going to get hot. Very hot.

This compounds the already excessive warming of the planet, having a knock-on affect of melting even more ice, permafrost and more.

The Greenland and Antarctica Ice Sheets

Now the Arctic sea ice melting is one thing. Put ice in a glass, fill it with water. As the ice melts the glass does not overflow. This is because the ice already displaces the water so when it melts, the ice that melts does not take more space than it already did. So although the Arctic sea ice melting is bad for global temperatures and the sensitive ecosphere there, it will not impact significantly on global sea levels.

Melting land ice is another matter altogether. Take the same glass, fill it with water. Now add the ice… get the picture?

So what happens if all this ice melts? Remember the glass overflowing and make a big mess when you tried to put the ice in?

I cannot describe how absolutely disastrous and cataclysmic the consequences of this would be. We will loose hundreds of major cities and millions of square kilometres of coastal land at a huge cost in life.

So what I say to you is this. You cannot ignore this any longer. By doing so we have been a major part of the problem. You need to take responsibility for your future, this is happening now.

Do not expect the government to save you. You need to make sure if the worst happens you can look after yourself and your family.

Shelter, water, food. Think about how you going to get those if you loose access to them. What happens if you don’t have electricity for weeks in the middle of winter? The water is contaminated due to flooding? Food trucks can’t get to supermarkets cause you snowed in? Be prepared.

Talk to your friends, neighbours and strangers. We need to raise the global consciousness. Only then will our voice be heard by the corporate backed politicians of our world. We need to make them hear that we will only support politicians that have strong policies on climate change and that will do something now.

Our governments do nothing about carbon emissions because we let them do nothing.  There is only one thing a politician cares more about than his corporate paymaster, your vote. If they believe they going to loose your vote, they’ll take notice.

I truly believe it is inevitable that we going to see major changes to our environment with a massive loss of the world ecosphere and in human life and that it’s happening already. It will only get worse. Extreme weather events like major flooding, extended droughts, extreme winters and summers are now the norm.

We will survive of course, unfortunately for this planet and other species that share this beautiful planet with us, but what we do now will make a major difference in the future by limiting the amount of change we going to see and therefore the destruction that change will bring.

Support those fighting for your future: